Last week the flu, this week bronchitis with lots and lots of time to obsess over news, politics, the Iowa Caucus, Twitter and other social media. So now I want to discuss a thought that keeps coming into mind as the attacks against Ted Cruz are mercilessly relentless.

The anti-Ted Cruz faction keeps hammering the line that Ted Cruz is not likeable therefore he is not electable, but IT IS A LIE. And I am sick of hearing that lie.

Ted Cruz is a Nerd. He is a political Nerd and I use all but one thing in Zachary Levi’s definition of Nerd to define Ted:

“One whose unbridled passion for something, or things, defines who they are as a person without fear of others people’s judgment.”

Ted Cruz is like every Nerd I know, passionate, smart, and all too often goofy. And best of all, he has trained himself to bridle his passion, which is evidenced in his familial relationships. That is what makes him an exceptional Nerd.

Ted Cruz’s ability to bridle his passion is evidenced in the debates. He is well-tempered. His Nerdiness slips out from time to time but it is never in the form of a temper tantrum or harsh words hurled to those with whom he disagrees. His Nerdiness is simply personal awkwardness or goofiness, never hurtful toward other individuals.

How is that not lovable? How does that awkwardness not remind one about all the goofiness in oneself?

I came to watch the NBC series CHUCK through Netflix last year. I was busy trying to finish college (late in life) so was not into it’s first television run other than seeing a commercial from time to time. The commercials never enticed me away from my studies. In fact, I only decided to watch it after seeing Zachary Levi in a Hallmark Movie REMEMBER SUNDAY. He was delightful in that role. Goofy, but delightful.

So that lead me to watch CHUCK, the entire series, once by myself, once with my Pops, and now a third time with my sister (though we are but halfway through the series). So I consider myself somewhat familiar with the Nerd Herd and especially Chuck Bartowski.

A few weeks ago I was watching Ted Cruz on some program and it smiling for the umpteenth time I chuckled saying outloud He is such an adorable Nerd. And then I FLASHED! He is so #ChuckBartowski!

Those of you who “know” Chuck Bartowski know exactly what I mean about Ted Cruz. CHUCK isn’t perfect either. But CHUCK is likeable and he grows on you. Just ask SARAH and CASEY.

Ted Cruz IS likable. He is LOVEABLE. He is a delightful, lovable, charming Nerd.

THEREFORE Ted Cruz IS electable. He is electable for many reasons. 1) He is smart. He is wicked smart. 2) Ted is tough when he needs to be and equally tender when appropriate. 3) He embraces the debate, he welcomes people who challenge his ideas. 4) He is adorable and awkward at times. 5) He infuriates the opposition yet 6) Ted charms with a smile. 7) His eyes light up when people, like Megyn Kelly, realize they have misjudged him. 8) He relishes being part of the team and likes to make sure We, The People, are included as his friends. 9) He loves  and fears God and equally accepts others whose faith differs from his own. 10) He is conscious of his family, treats his wife with great respect and adoration. And that is just the beginning of all the things that make up the man, Ted Cruz. 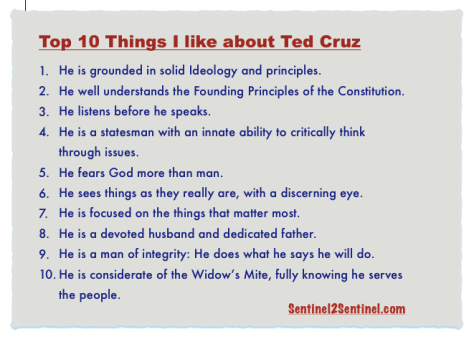 His passions for life, liberty and happiness run deep, interwoven into the fibers of his being. He is a Nerd. He is a LOVEABLE, likable, electable, Political Nerd.

Join www.TedCruz.org to be part of the Ted Cruz Political Nerd Herd and be sure to get the APP.