Well. I have good news and bad news so here we go…

When I heard the rumor of Jim DeMint being ousted from Heritage Foundation last week, I took everything with a grain of salt while keeping a close eye on the Twitter feeds of DeMint, Heritage, Heritage Action, and Mike Needham. There was nothing but silence. so I knew something was wrong. Then more information kept rolling out so I tried to analyze what was being written to not make an emotional judgment.

By Sunday I knew I would be pulling my membership donation to Heritage even if half of the debacle was true. Still, I held off until Monday in a good faith gesture to Heritage but when more information kept coming out with silence from Heritage, well, it was all over for me.  My heart felt heavy for I have been a Heritage Foundation member since 2002 and a follower of Heritage since long before that therefore, my phone call to Heritage, first thing this morning, was exceptionally bittersweet.

I love Jim DeMint and I love Mike Needham. I love being a Heritage Action Sentinel. For how long is yet to be determined, especially after the rather ugly announcement by Heritage’s Chairman of the Board of Trustees, Thomas A. Saunders, III that was then forwarded to Heritage Action Sentinels. (Bad Form, Mr Saunders. Not a good enough intro to the forward, Mike.)

I have absolutely NO REGRETS in pulling out of donating to Heritage Foundation over this debacle and especially for their torching Jim DeMint. Ben Domenech said it best on Twitter: 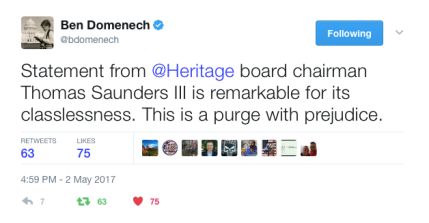 The good news is I can now spread some of that Heritage donation money around to PragerU.com, Sons Of Liberty International, Hillsdale College, MercuryOne.org  and maybe even Star Parker’s UrbanCure.org. And of course that means more to rid the House and Senate of Progressive Republicans by donating to Senate Conservatives Fund. (They help clean the House too!)

2 thoughts on “Pulling my Heritage Donation is Good News for…”

Welcome back to the playground!