Today is day two of Charlie R. coming to my home to hangout this week. We had so much fun. It was one of those best day ever kind of days.

For lunch I made salmon. Charlie R. ate a few bites but he really was not in the mood for it. Next we went to a baby food pouch and a peanut butter sandwich, no crust. That went over much better with some milk to drink.

We had some playtime with measuring cups and a spatula scraper. That lasted about an hour as he walked around tossing the items and picking them over and over again. Once in a while he was distracted by a little musical truck but he loved those measuring cups and spatula more, returning to them quickly. 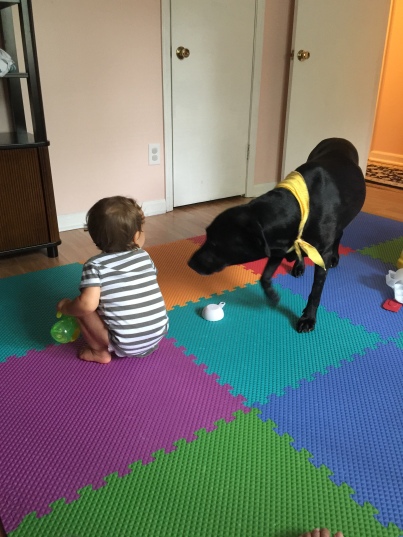 When Charlie R. gets tired he climbs into my lap. Well, in and out of my lap, over to the right side and back to the left, finally settling in to being sung to until eventually falling asleep. And today, he took his best nap ever. Two hours and about twenty minutes of a nap made him the happiest boy ever.

My happy boy woke up ever so gently. He greeted me with the biggest smile on his face. He cuddled for a few minutes in the big chair as Janie Belle, the big black Labrador, came round to check on him, sniffing toes and nudging his little legs to get down and play.

A diaper change, a drink of water followed by taking the doggies outside to romp in the wet grass, Charlie R. and I sat in the chair to watch them play while he ate his snack.

When his hands were free and his mouth satisfied, Charlie R. turned to the puddles of water that had formed on the table from the earlier rainfall. Sitting there for a few minutes, he splashed and wiped the water around with his hands and that great big smile. He swished through the water until it was all but evaporated. Just a couple of light streaks were left from the larger spots from which he began.

Time was up. We had to move on. Charlie R.’s mommy and daddy were waiting. And Charlie R. needed to go meet and greet some of his biggest fans.