The Marco Rubio speech that ignited the ire of Conservatarians (Conservative leaning Libertarians) and Libertarians is a prime example of the speed of the LACK of trust in elected officials who appear to be steering away from the 9-12 Principles & Values the Tea Party Patriots embraced. Those are the very values that got many those people elected.

In conversing with my Sentinel2Sentinel friends, many of us, Late End Baby Boomers, feel like we have been shafted by the 60’s generation only to now be shafted by the upstart Millennials. They are our bumper generations of #TrophyChildren, the ones who deserve it all at the expense of those around them while they complain about the generations before them, the Fat Cats, for “leaving them behind.”

And they will have their way, after all, they all whine a lot and have a lifetime of experience in demanding they get their wants met. 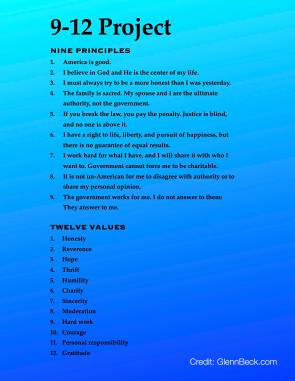 Look at the who’s who of the generations in Congress. And then really look at the few who truly speak out against the things that run contrary to the 9-12 Principles & Values. Who are the men and women fast tracking themselves up the ranks of the Grand Old Party? Who is behind them? Who is whispering in their ears? What is the philosophy they are peddling?

In case you missed it: Josh Hawley Is Quickly Becoming One Of The Most Important Conservatives In America. Where does he fit into your political philosophy and to whom does his thought process appeal?

All this talk about Common Good Capitalism is nothing if it is not founded upon the 9 Principles and 12 Values as defined in the tenants of the 9-12 Project.

So let me suggest you get the book CONSCIOUS CAPITALISM by John Mackey and Raj Sisodia. And let’s start adding to the discussion how the Free Market System, the Capitalist System has equally been abused by Politicians beholden to lobbyists and others who whisper in the Politician’s ear in the guise of “common good.”

Let us begin with not calling the Capitalist System anything but what it is: Capitalism.

Cronyism is cronyism and cronyism abuses the Capitalist System.

Conscious Capitalism, if it is free of government interventions, bailouts, special regulations, and truly operates on the principles of free will without compulsion, and that includes being free of the Cass Sunstein Nudge philosophy, will not abuse the Capitalist System.

Links fixed! Sorry about that!