Russ Vought, the former Director of the Office of Management and Budget (OMB) for the Trump Administration, is a long time acquaintance since his days at Heritage Action. Russ ran the OMB with the utmost integrity. He is an amazing individual and he is the reason for my post today.

Now aligned with the work Russ is doing at The Center for American Restoration and the activity arm, American Restoration Action (ARA), you are invited to learn more about ARA. Especially, I invite you to join in on the Thursday Calls to be enlightened on important issues that should drive the Constitutional agenda to Restore America.

See the attached pdf and if you want to become part of the force for change, you can do so here: https://mailchi.mp/americanrestorationcenter/ara-signup

Thanks for you consideration!

Since taking the 10 Day Social Media Fast I realize I am beyond bored with Facebook and Twitter. I also have a Gab account however find that I do not use it as much as I do Twitter of which my usage is somewhat waning. The other social media accounts I have at Instagram, Periscope, and Snapchat are rarely used anymore either.

As far as news portals go I am still thrilled with The Blaze and I recently went back to checking Drudge Report. Of course there are the smattering of sites I enjoy and a few Tweeple I check out regularly to see what interests them.

After many years of watching politics and working for alleged Conservative causes I have backed out of all but a few sites. Having tuned out the National Republican Senate Committee, the House Republicans, I still follow the Senate Conservatives Fund and Conservative Partnership Institute.

For years David Horowitz has warned and forewarned and discussed how to fight against the socialist movement. And look where the squatters in the GOP have left us: Kevin McCarthy as Minority Leader in the House with Mitch McConnell as the Majority Leader in the Senate. To borrow the phrase from my friend, Jonathan Hoenig (CapitalistPig.com), “Cut the losers and let the winners run”.

McCarthy and McConnell are losers for a true Conservative-Libertarian agenda. Their record proves it.

The winners are The House Freedom Caucus and Senators like Mike Lee, who hold sacred the divinely inspired Constitution, who continuously and tirelessly work to affect change as Statesmen.

To simplify and reduce the time I spend on keeping up with the GOP, my choice is now to focus on The Winners, the men and women who truly walk on the Constitutionally Conservative path. There are simply not enough hours in the day to waste time on the Losers, the Liars, or the Loyally Misguided Progressives in the Republican Party. The focus must remain on those willing to #FrameTheDebate for the Conservative Agenda, for that which takes us away from enslavement ideology to that of being free to govern ourselves.

I really like the Conservative Reform Agenda that Mike Lee laid out on his site:

Freedom doesn’t mean “you’re on your own.” It means “we’re all in this together.”

This conservative vision for society is not anti-government. Civil society depends on a just, transparent, and accountable government to enforce the rule of law.

But a government that tries to do too many things can end up stifling human cooperation instead of enabling it. Big government turns citizens into supplicants, capitalists into cronies, and cooperative communities, into competing special interests.

Good luck with that come January 2019 for apparently the Socialist Democrats, the #NewTotalitarians (same as the #OldTotalitarians), will  continue to run down the failed and abusive path of Marxism, smirking and smiling and making love to us all (Jane Austen, Pride & Prejudice).

It is tax time and GOP leadership is going on about Tax plans. Well, how about #FullRepeal? Where is the talk about #Obamacare=the #ACA being a TAX PLAN?

As we all know, two years ago, Chief Justice John Roberts changed the Affordable Care Act’s individual mandate into a tax and thus rescued President Obama’s signature legislation. What you may not know is that with this slight of hand—or flick of the wrist—he actually sent Obamacare flying from the constitutional frying pan into the constitutional fire. ~ Ilya Shapiro, MAY 12, 2014 @ 12:24 AM

Shapiro goes on to quote John Marshall, where Marshall “wrote in the foundational 1819 case of McCulloch v. Maryland“:

So Mr. Speaker. How about #FullRepeal and #CutCapandBalance? And while you are doing that, #MakeGovernmentSmallAgain. #Basta!

Today I visited my Congressman’s home page and saw he has a 2017 Constituent Survey up. Here is my response to Bill Posey’s first eight survey statements:

To answer your 2017 Constituent Survey:

1) Yes it is important to always temporarily restrict travel from nations that we know pose a serious national security threat to the United States of America.

2) Social Security is a nightmare. It has grown larger and more out of control than it was ever meant to be. It was originally designed to help people in their last years when they could not work, not the disaster it is now is become. It is a ponzi scheme therefore, your poll statement is horrible and is absolutely the wrong discussion to press forward. Read this Social Security Primer.

3) Yes. Put a five year-ban on White House and Congressional officials from becoming lobbyists after they leave government service.

5) Secure the border and ENFORCE CURRENT IMMIGRATION first before you start a web of new laws to reform what is probably not broken.

6) Yes. A border wall/barrier is reasonable and an effective part of keeping illegals out.

7) YES to Fully Repeal ObamaCare and Get Government OUT of Health Care. RESTORE THE FREE MARKET.

8) NAFTA needs improvement so be sure to break open transparent discussions on the subject as you move forward on what should happen next.

The weather has taken a turn over the last few days by increasing in damp coldness. After ten years in Florida with realtively mild Space Coast winters, the Montgomery days of warm and c-o-l-d  with raining weather have taken a toll on me. The sneezing, watery eyes, itchy ears and face have come on slowly until it has just about taken me down this evening. I am definitely not wanting to line up for a second go of bronchitis this first quarter of 2017.

My coaches from 26.2 CrossFit can mock me now for all of the times I teased them, mercilessly, for wearing hoodies in low 60 degree weather. Well, except for the fact that today it was WAY colder than Space Coast weather where I now live (shoutout to Guns Out CrossFit). 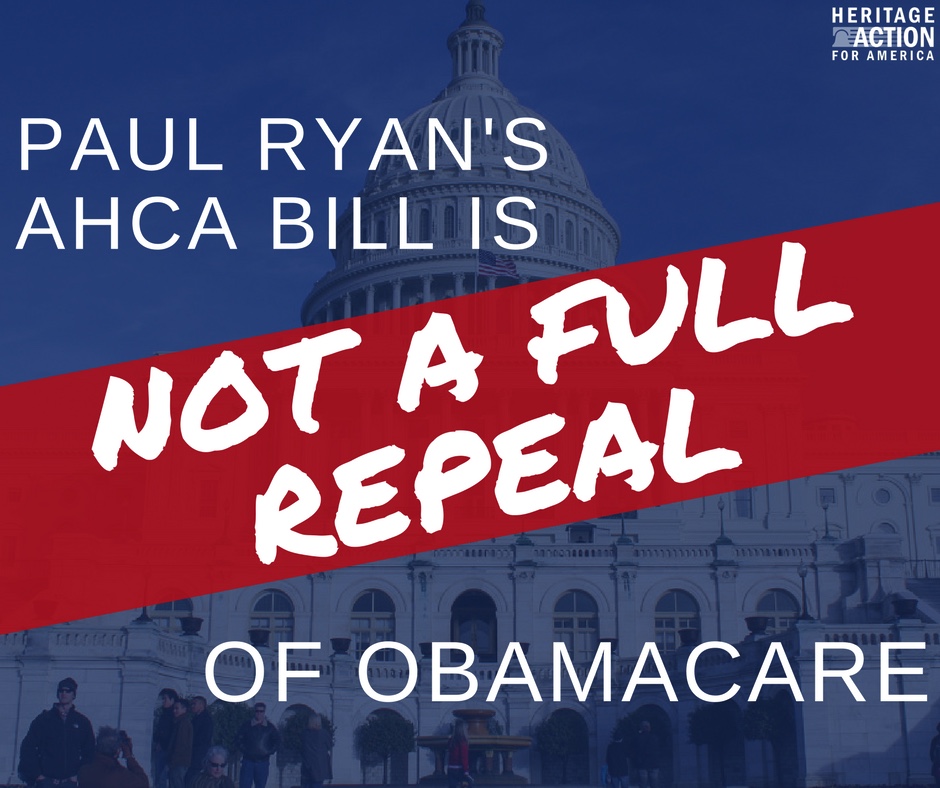 Sneezing like a typhoon throughout the day, it is now time to crawl under my electric blankey, drift off to Neverland dreaming of the day when Paul Ryan’s sickly version of the ACA and #Obamacare are fully repealed. Repeat: FULLY Repealed then replaced with Free Markets!

After going through yesterday’s nightmare analysis of #Ryanocare and learning of Vice President Pence’s warning  I felt spitting mad. However, a few things have happened since Speaker Ryan’s announcement that brought me great pleasure because honestly, I am sick of Leftwing Republican Leadership (LRL House and Senate – you have clink a bunch of different links).

It is high time for the full on Republican Revolt.

Mike Lee and Ted Cruz have been fighting totalitarians in and out of the party at great personal expense for a long time, God Bless them. They have been the the most vocal, most principled and consistent conservatives in taking on Team LRL. Surely now is the time for the Republicans and Conservatarians in Congress to step up, speak out, and press forward with a serious #FullRepealFirst bill and then move on to Cut, Cap, and Balance the Budget with Mike and Ted.

BTW, I am looking for a less cautious statement, Senator Cruz.

Now for the Good News:

2)  Thanks Mike Lee, you know how to #FrameTheDebate: This Is Not The Repeal Bill We Have Been Waiting For

Reading through so much info on the, alleged, Republican Obamacare bill today, all I feel is disgust. Paul Ryan and Mike Pence and all of the GOP Leadership appear to be exercising sophistry against the Conservatives in Congress with this #Ryanocare plan.

So to my friend who asked me what I think: I am so mad I could spit.

“In many ways, the House Republican proposal released last night not only accepts the flawed progressive premises of Obamacare but expands upon them. Ronald Reagan once said, ‘Government’s view of the economy could be summed up in a few short phrases: If it moves, tax it. If it keeps moving, regulate it. And if it stops moving, subsidize it.’ The AHCA does all three.”

In lieu of spitting or spewing out words in rage, I am posting all of the things I have read today that matter most to me. Yeah, right after stating how  irritating it is that Paul Ryan was supported as the Speaker of the House. Yeah. I could spit over that one too.

To everyone who voted for Speaker Ryan to remain in power, how is that working out for you now?

Oooo, that Mike Pence. Yeah. Wanting to spit over the Pence article below, my advice to members of congress, especially mine in Florida: #REVOLTandFULLREPEAL.

Read why #RyanocareHell = #ObamacareHell and then take it to your member of Congress. (And please, if you spit, do not tell them I sent you.)

There was a great tweet that Andrew C. McCarthy put out regarding an interview with Sebastian Gorka on PBS. When Andrew recommends something you know it is definitely worth looking into. And wowser was it worth watching. Sebastian Gorka can #FrameTheDebate.

WHEN will GOP Leadership just go with the flow and have an UP or DOWN VOTE on #FullRepeal?

Or is the GOP Leadership afraid to merely shut up and and simply vote Yes or No on #FullRepeal?

Jim Jordan did a fantastic job on ABC yesterday. He understands how to #FrameTheDebate when it comes to #ObamacareHell.  Jordan understands that:

To clarify things for Republican Leadership:

And to be sure there is no misunderstanding, Americans are sick and tired of middle-of-the-road–milk toast – mediocre Republicans in the House and Senate. Americans will no longer tolerate your backroom dealings with your front room facades.

The #BetterWay, the best solution, is to simply vote on One Sentence: Full Repeal First.

So I saw this article with alleged comments by former Speaker John Boehner on my Twitter feed this morning and thought my head would explode.  John Boehner, it seems, has come out of the shadows. It makes me wonder why he is emboldened to to speak out in such a a manner. Who pushed him into the light?

Honestly, I want to thank Boehner for confirming that I need to keep on encouraging my congressman, Bill Posey, to support #FullRepeal.

Thank you, Jim Jordan for standing firm on repealing Obamacare. Thanks for being consistent.

As for the rest of the GOP wafflers, get on with full repeal already. You can do it one more time.

‘REPEAL AND REPLACE’ OBAMACARE — WITH THE FREE MARKET

The Art and Craft of Blogging