Today was the last day of the Montgomery Interfaith Nativity. My friends were singing this evening so after the Honey-do got home from Church we spent a few moments reflecting on the day, closed out our Fast Sunday with a prayer, quickly grabbed a bite to eat and then headed out the door.

We made it just in time to support our dear friends, Lana and her Grandpa Marty, singing at 5:30 p.m. They were wonderful and absolutely charming together. It was lovely to see them, as family, working in harmony to share the Spirit of Christmas with the Interfaith community.

Then we stayed for the next performance by the Christmas Trio, a women’s trio, who sang several Christmas lullabyes.

We made it home in time to feed the dogs and watch the Christmas Devotional from home. What a lovely Sabbath day of worship through music and the spoken word. 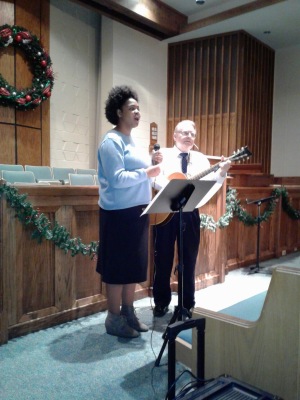 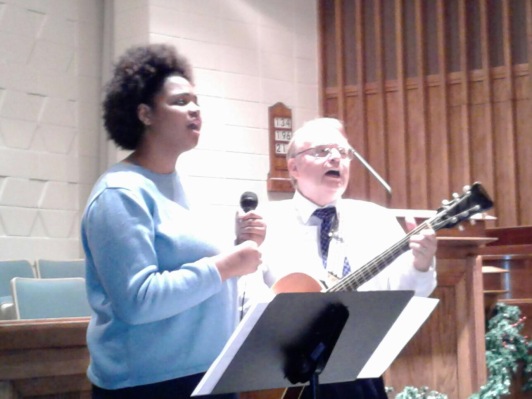 One thing that I really love about volunteering as a hostess at the Montgomery INTERFAITH Nativity Exhibit is meeting the people who attend the event. It always is fun to watch those who hunt for the Nativity set they freely share with the community. And it is especially fun to ask them to tell their story about their Nativity set. The stories are as varied as the sets on display. Some are whimsical, some surprising, charming, delightful, and some are deeply moving and sentimentally wonderful. 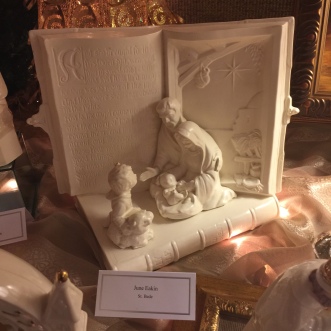 Let us begin with the ceramic piece that is about 30 years old. Two daughters came with a friend and shared how their mother used to do ceramics on the table at their house. They spoke so tenderly on how this particular piece was loving made by their mother. They giggled recalling how their father could not stand the dinner table being covered with mother’s crafts and how they eventually would take things to the shop where mother would finish an item. 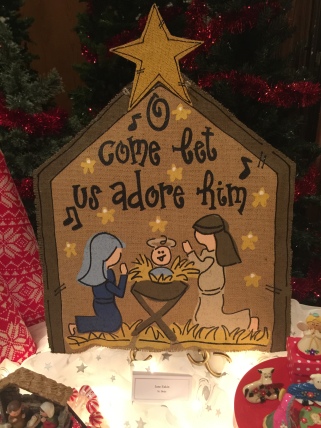 The woman who owns the painted Nativity wall hanging was with the aforementioned sisters. She is the Godmother to one of the sister’s daughter. You should have seen the pride and joy on her face as she lovingly spoke of that daughter’s Nativity gift to her.

Carved by a rice farmer in Laos, the man made several Nativity Sets and sold them to many Americans he knew through a church connection. He used the money to help pay for his children’s education. 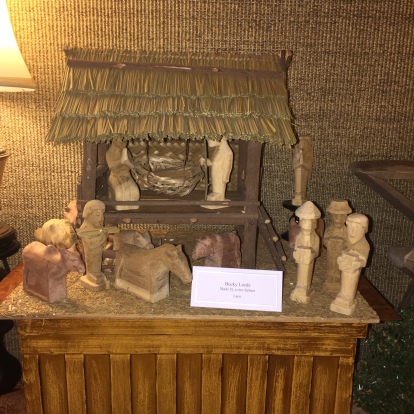 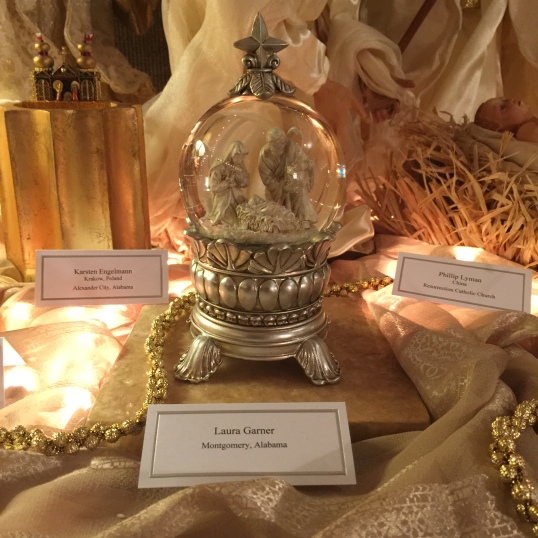 The woman who owns the lovely snow globe got it from Cracker Barrell for nine dollars about eight or nine years ago. Nine dollars! A battery in the base provides the energy needed to move the snow around in the globe! How cool is that! Elegant, inexpensive and practical so those little hands in her home do not have to shake it to see it snow.

Some of my favorite conversations come from sharing these stories with others at the exhibit. Their reactions to these stories are priceless. It is as though I can see the lightbulb pop up over their heads, and see the wheels spinning in their heads. Sometimes they share a creative thought, or they get excited to seek out Nativity sets in places they never thought of before. But my favorite responses are always those jogged memories that lead to visitors sharing a personal history story.

Personal history stories are a great way to #LightTheWorld. And it easily begins with simple things like a babe, laying in a manger in a Nativity exhibit.

There is so much going on in preparation for the Montgomery INTERFAITH Christmas Nativity this year. Volunteers put in a few hundred man-hours to prepare for this spectacular one week exhibit.

If you have a child between the ages of 5 and 13 years then please have them join in the Christmas Art Contest. The artwork can be submitted on Saturday, November 18 between 10 a.m.  and 4 p.m. or on Monday, November 20 between 10 a.m. and 6 p.m. The entry is free! KidsArtContest2017_letter_2pages-2

Here is what you need to know now: We are off and running!

VOLUNTEERS from the Faith Community share their Navivity Sets with the public for one week’s time. (See Saturday, November 18th.)

Volunteers help with the pre-display set-up, registration of the Nativities, and the take-down and clean-up of the event. Volunteer musical performances take place every hour with everything from vocal solos to bell ringers to ukulele players. Last year there was a  group with bagpipe players and drums and they were marvelous.

So here is the rest of what you need to know, for now:

Thursday & Friday, November 23rd & 24th ~ Thanksgiving… nothing on these two days but….

TAKE DOWN BEGINS MONDAY DECEMBER 4th and runs through the 6th so I will post more about that later for several volunteers are needed then too!

When an event, like a hurricane or tropical storm, takes place that creates the need to cancel worship services for the safety of our congregation we are then encouraged

In our home we are thankful to have electricity and to have weathered the storm without incident so we offer prayers of gratitude and read the scriptures.

We turn on the Roku and dial into YouTube where we find the Mormon Channel. We proceed to the Mormon Tabernacle Choir live feed to see their morning broadcast of MUSIC & THE SPOKEN WORD and we enjoy several more videos.

From General Conference last weekend, we replay the Saturday morning session and then we each take some time to work on our respective callings, his as Bishop and mine as a Primary worker with the MoTab music feed streaming throughout the house.

It is a great Sabbath Day.

“Tropical Depression Nate (recently downgraded) is rolling through central Alabama. There is an area of gusty wind and heavy rain falling just east of the center; this will continue to affect Chilton, Coosa, Tallapoosa and Chambers counties over the next few hours…  montgomery.raycomweather.com

There are folks who think nothing of Christmas should be seen before Halloween, but I say BRING IT ON! I love the Christmas decor, especially in the South where the seasons are not as obvious as they are up North. Of course I understand the commercialism side of not wanting to see the decor up too soon. However, knowing what the real meaning of Christmas is, it makes me ever so happy the moment the first of the fake trees or decorations or wrapping paper or whatever appears! Especially Music! 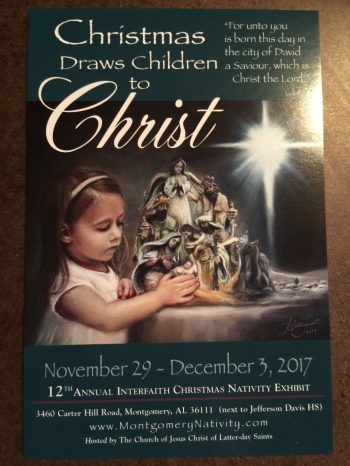 Having a ton of decorations all over my house is not my thing. I have several Nativity sets that I love to display. Normally I have them in my hutch for display year round. Last year we moved to a smaller place in another state so I only have one out now and use the rest of the space to store all of my dishes, flatware, and glassware.

That reminds me to put in a plug for the MONTGOMERY INTERFAITH NATIVITY EXHIBIT  this year. It was so lovely last year. It was my first time attending the display. This year should really be lovely as members from many congregations bring their Nativity sets to share with the Montgomery community. It is an incredible display of unity where we can demonstrate that we truly are of one heart and one mind in celebrating the birth of our Savior, Jesus Christ.

The photos below are some I took from last year’s event where I volunteered to be a hostess for a few sessions. Definitely, I will be volunteering as a hostess again this year and look forward to doing so with great anticipation.

The Music Event Coordinator, my dear friend Stephanie Ladner, invited me to sing for a twenty minute segment. That is a long stretch for me as a soloist. She smiled and said she would take fifteen if I was willing.

IF I say (teeth chattering) Yes, it will probably only be for fifteen because twenty is a long time. #LookingUpSheetMusicNow 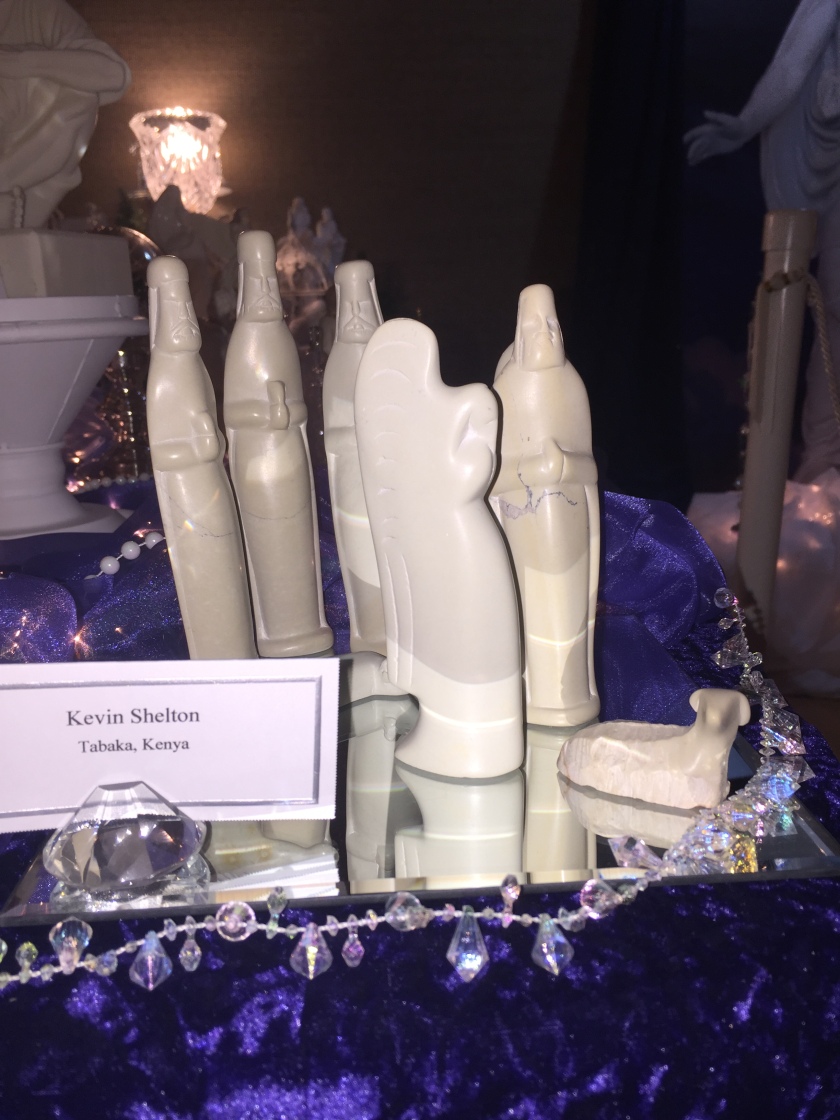 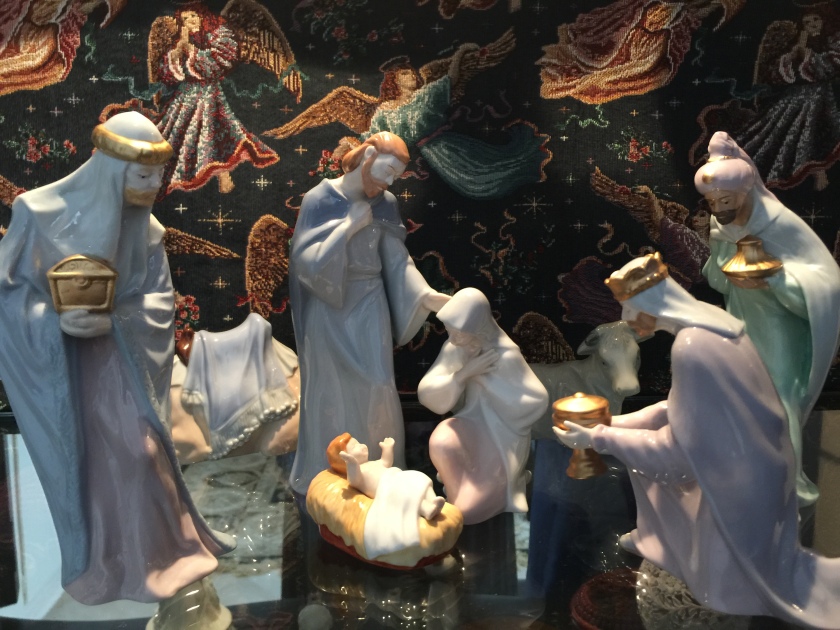 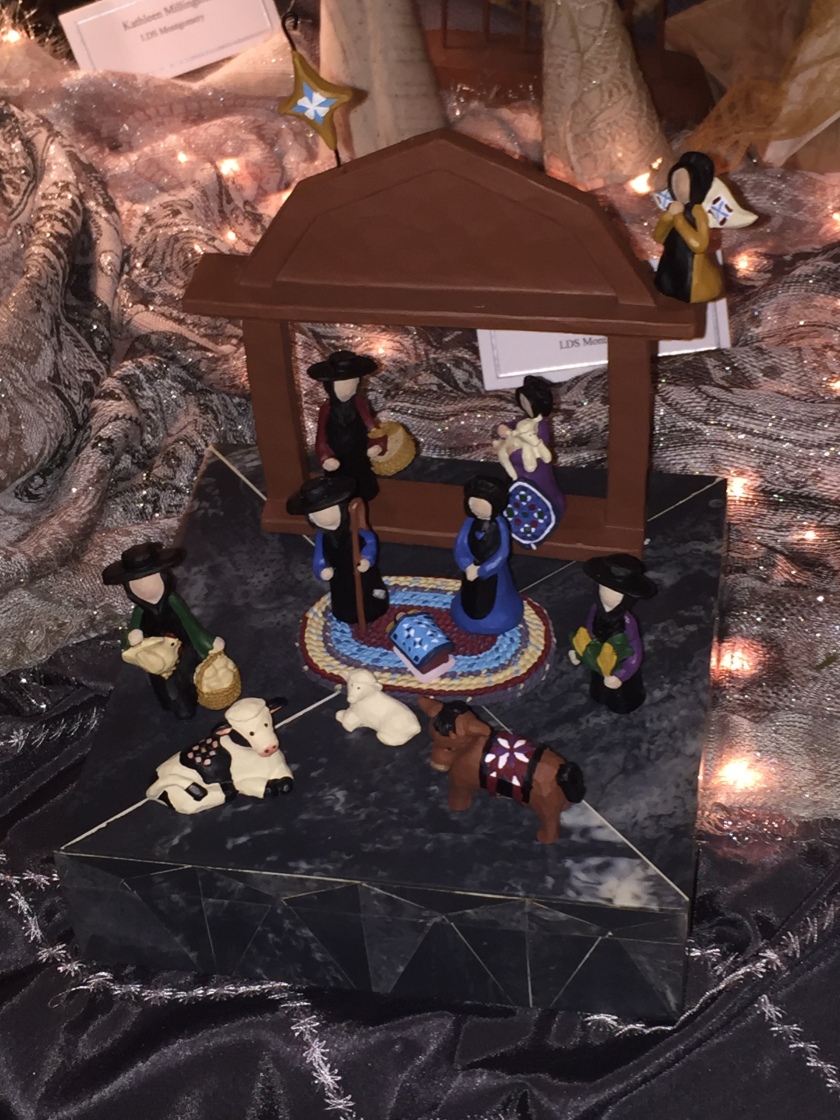 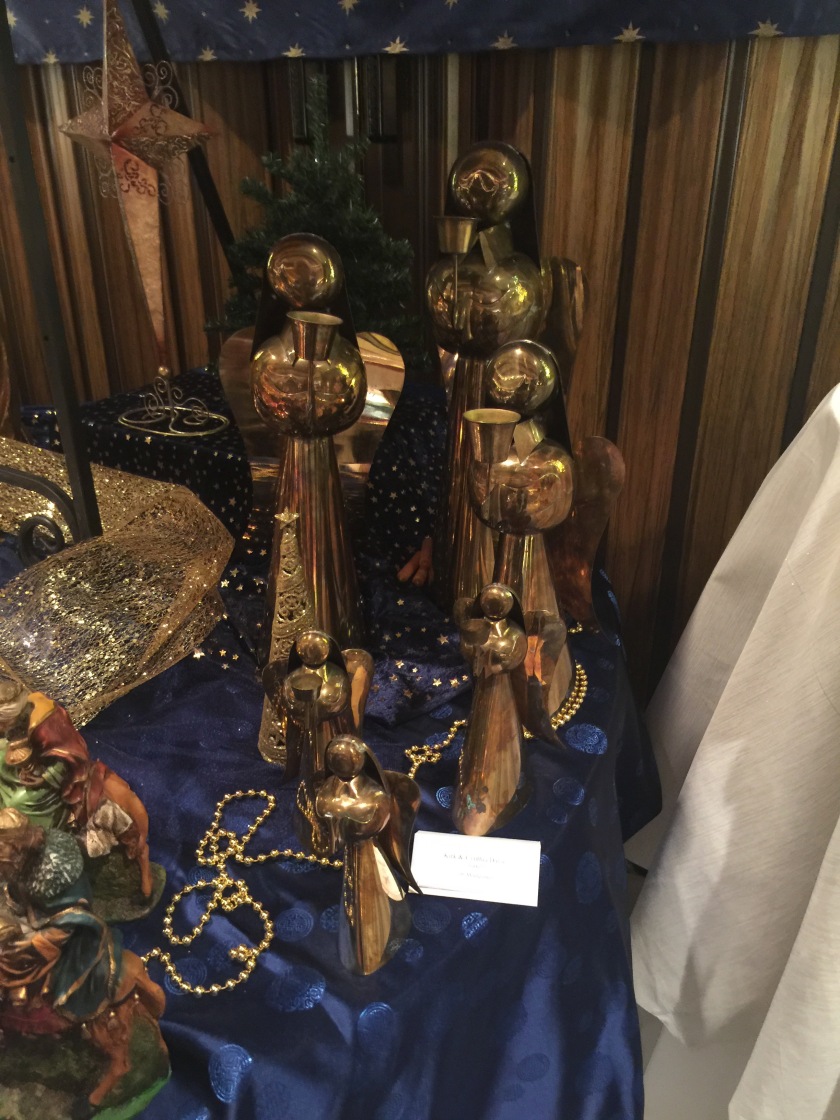 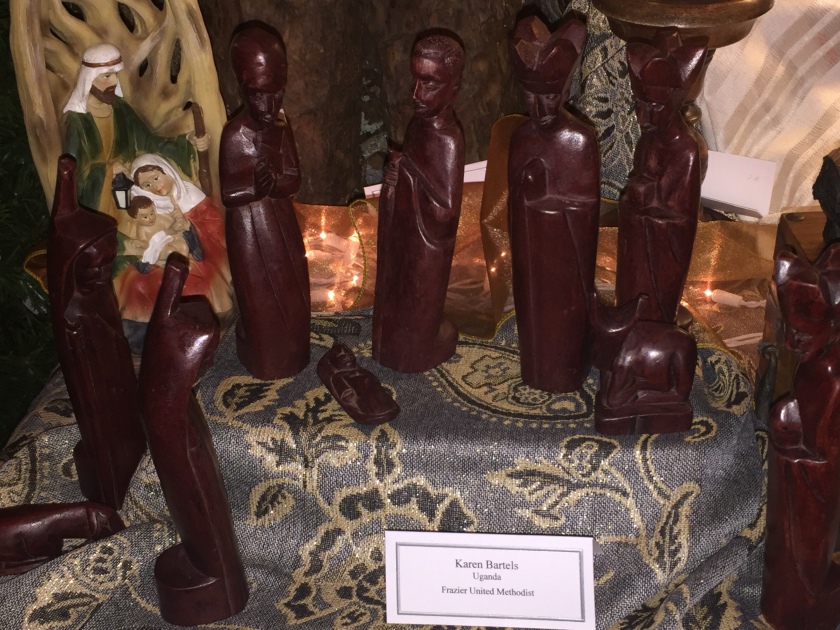 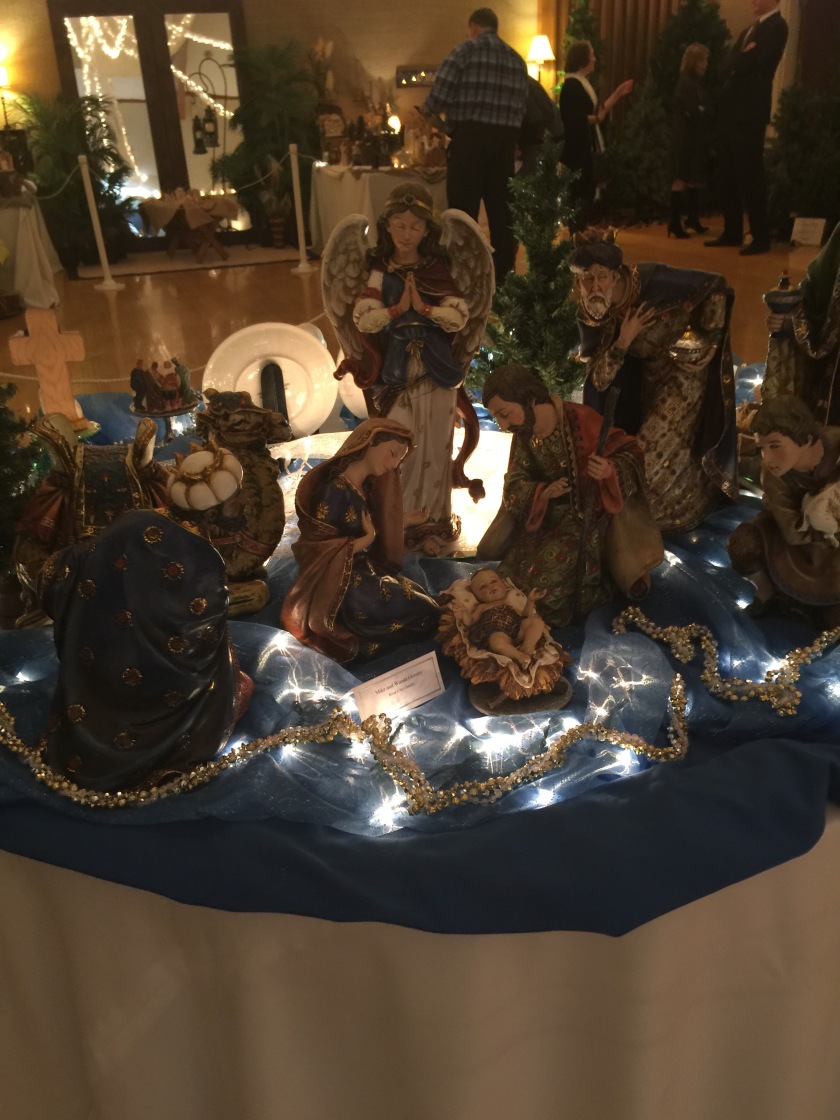 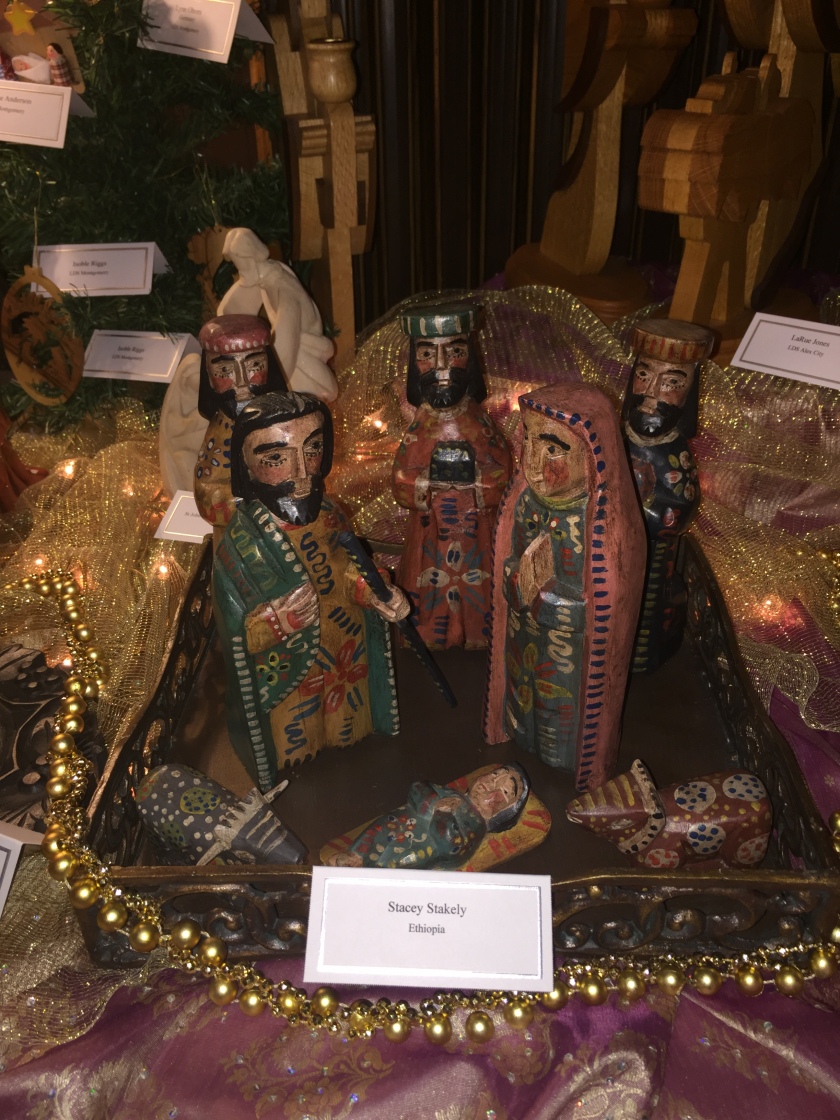 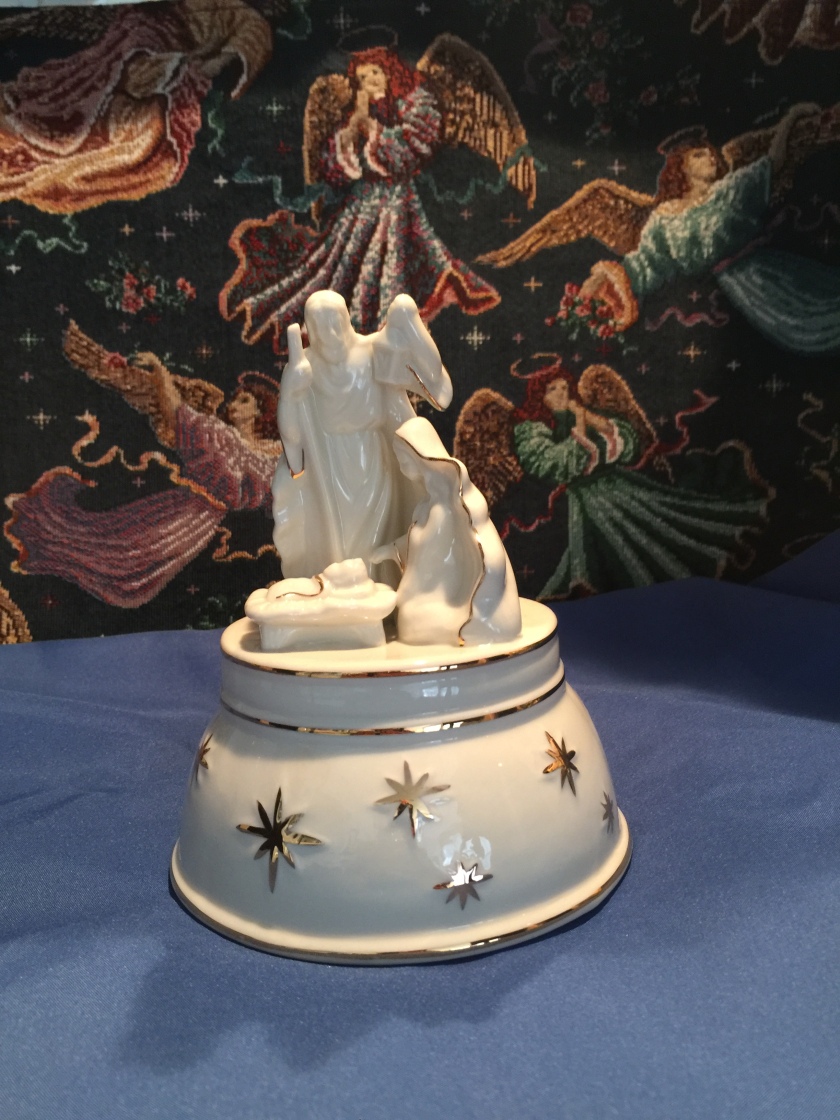 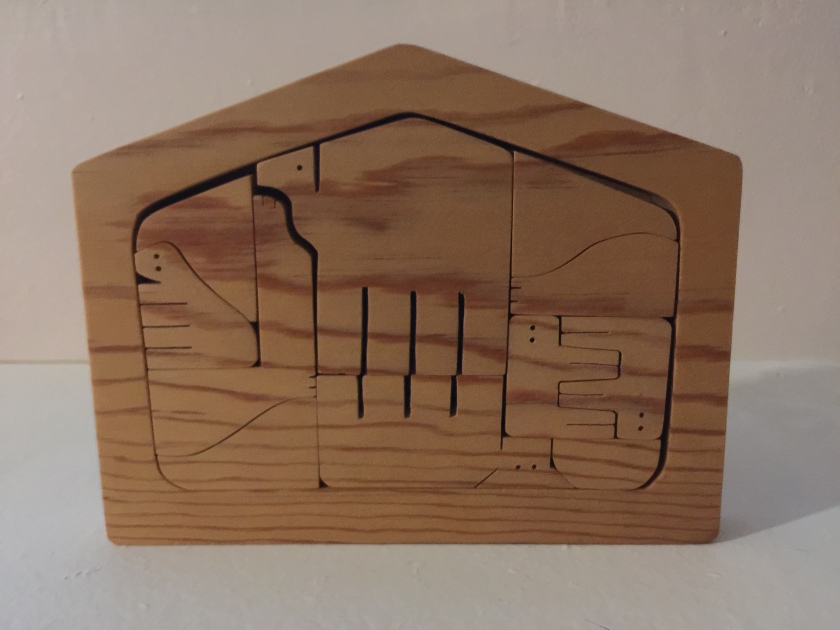 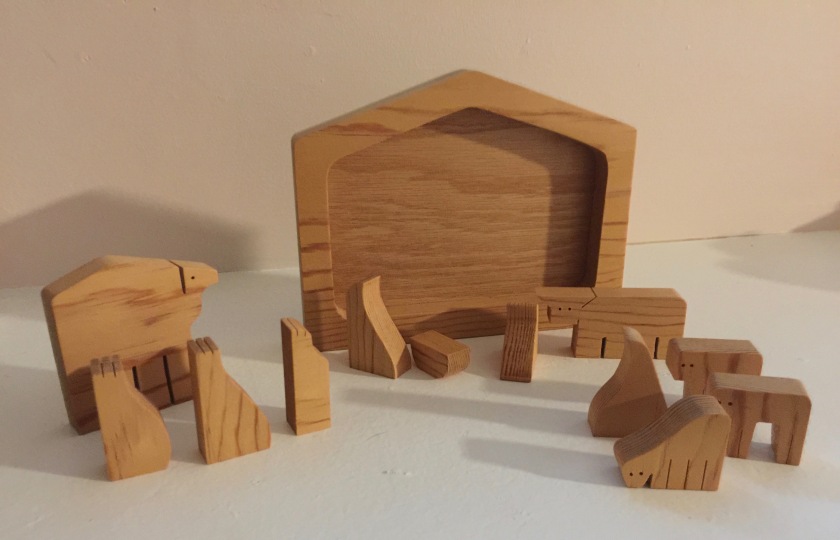 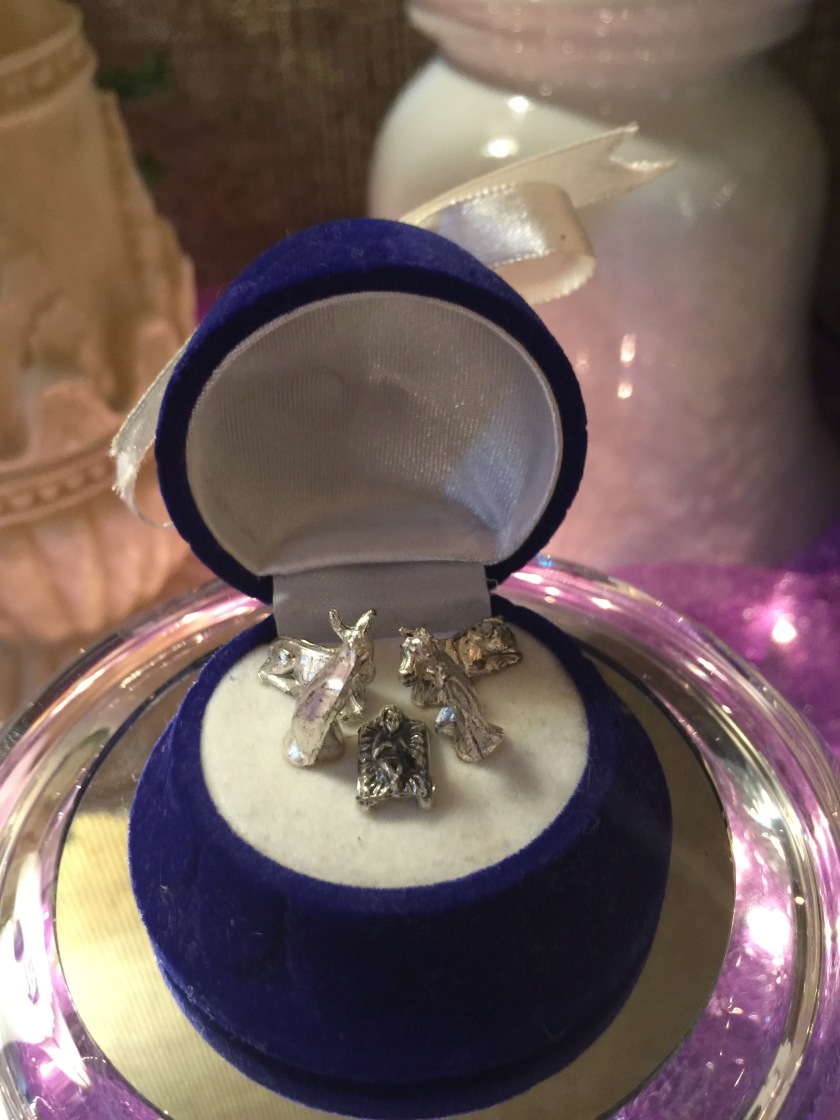 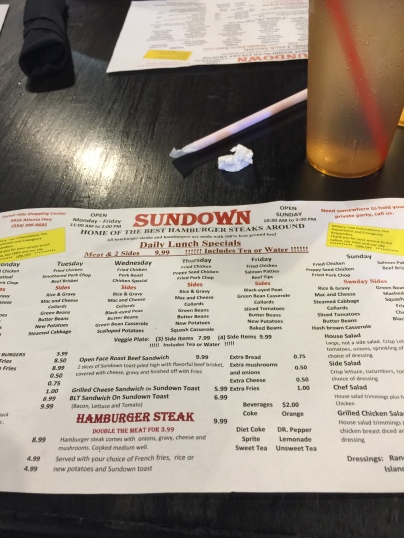 Met my friend, Pat, for lunch today. We met at the Sundown. Neither of us had eaten there before so we had a great time perusing the menu, trying to figure out what we wanted.

Both of us ended up with our first choices, a Burger, and we shared the french fries. She got the cheese burger and I got the bacon cheese burger.

If only we had taken a photo of the delicious hamburger and fries we ordered before we gobbled down our food.

Yes. It was one of those best hamburger day ever moments.

#FoodSins. Yep. I am a Food Sin Sinner who is working on becoming a #FoodSalvationSaint, not yet ready to give up all food sins but willing to take one step at a time in the right direction. That first step back on the right road food sainthood is with Fittz Meals. (Thank you Coach Charles at Guns Out CrossFit for the introduction.)

As a winner of the Fittz Meals Contest, my prize was an 8 ounce salmon filet dinner with two roasted vegetables. It was waiting for me in the fridge at GOCF today. 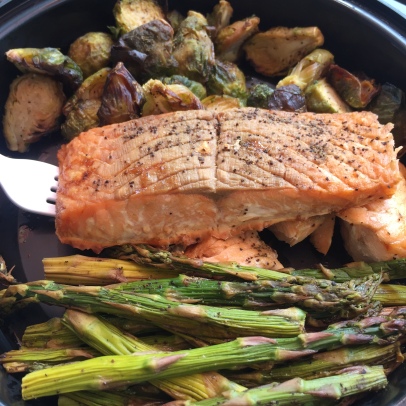 Taking it home for lunch, man-oh-man was it fabulous. There was so much food that I only ate half of it so I could share the rest with my Honey-do-husband. Well, I ate three-fourths of the salmon in all honesty, but I did save him a couple of bites so hey, Good Girl for me!

Honey-do picked up our order yesterday from the Yellowhammer Cafe.  He decided to take his first step on the path to better eating with the beef tips, brussel sprouts and cauliflower tonight instead of my salmon leftovers. That is all fine by me because now I can have the rest of it in the morning for breakfast!

We are truly pleased with the quality and taste of our Fittz Meals so far! We look forward to trying the rest of the meals this week. And we have already placed our order for next week!

Yeah Baby! On that trail to portion control with healthy eating.

Don’t be jealous! You can do it too! Just log on to Facebook to check out Fittz Meals in 4 ounce, 6 ounce, and 8 ounce protein meals plans.

My Coach Allie, in Rockledge FL, posted this photo the other day. It is true. 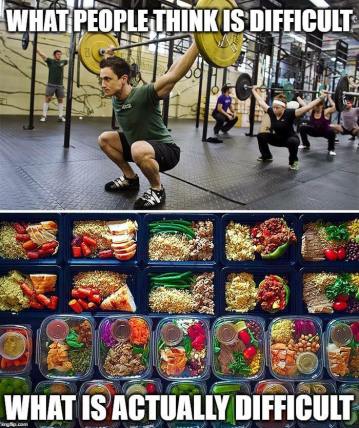 My Coach Charles, in Montgomery AL, has been talking about FittzMeals.

Between Florida and Montgomery, I sure hate tracking my food. Stinkin’ portion control is even worse. However, sometimes a girl has just gotta do what a girl needs to do.

I pick up my first week of meals tomorrow to kick start my attitude and to help get me #BackOnTrack.

I was going to talk about my CrossFit Games 17.5 WoD today but the power is totally out in as in a major neighborhood blackout. Therefore, I am typing this out on my iPhone. Thankfully I put it on the charger when I got home.

So I am sitting here in the glow of my iPhone, my Sheltie at foot. My Lab is in the master bedroom, on the bed, while my husband is outside investigating the issue.

And that is my big post for the day. It ain’t all about me.